The launch of the Canon EOS 20D in August 2004 took the world by storm quite literary. With 8.2 megapixels and a superior DIGIC II CMOS sensor means photographers can enjoy superb low light performance and exceptionally low noise images, even at ISO 1600. In this article, Canon USA states “The EOS 20D digital SLR can be used as a backup camera for the high-performance EOS-1D Mark II digital SLR,” I beg to differ. In fact, I found the 20D so unbelievably good that it went from a backup for my 1D MkII to replacing it as my favourite body for professional work. In case that didn’t register, I sold the 1D MkII and kept the 20D and Canon Singapore folks were understandably puzzled when I told them this.

But there’s more … the popularity of the 20D quickly became a media attention when bodies fitted with the optional BG-E2 Battery Grip started showing an anomaly.  An anomaly that, as far as I’m concerned, began with the EOS 300D. Problems surfaced when users reported premature and unusual Battery Low, a phenomenon that plagued me more times than I cared to remember and the awkward situation I found myself in several times during a critical assignment. 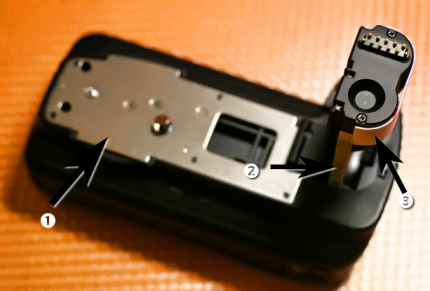 I put up with this intermittently occurring phenomenon for sometime. There seemed to be a couple of recommended fixes prescribed by Canon, one of which required several washers to be placed at corners of (1) above under the factory face plate. A second fix involved ‘fixing’ the camera voltage that may have fluctuated outside the normal operating range/tolerance. Guess what? they did not work, at least for me, the problem came back with renewed vengeance and it started occuring more frequently than before. After an official fix didn’t work, I researched on the web for ideas and eventually led to what I believe to have permanently fixed the problem.

Identifying the source of the problem is as critical as fixing it. It seemed that the problems stemmed from what was known as flexing of the grip. I’ve never owned a 10D nor have I ever held one with a grip fitted but it’s been widely reported that the 20D’s grip was flimsy and cheap at best. No argument there.

Now, take a look at the picture numbered above. I found a lot of play at locations (2) and (3). After I had padded the affected areas, the grip became solid and no longer wobbly when pressured is applied. Then I picked up another idea from a forum poster. Instead of fitting washers under the black top of the grip, I took it off and doing so increased the depth on which the body can be tightened. The combined fixes gave me a very firm and usable product! 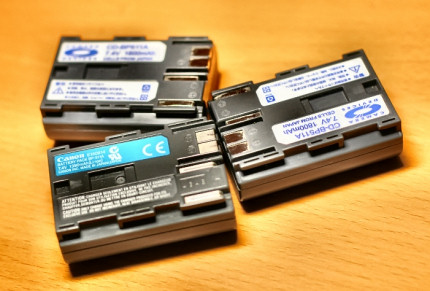 But that’s not all. I have two sets of batteries, a pair of original BP-511A 1390mAh and another pair of OEM (Camera Devices) 1800mAh that have worked well for me. The thing to note here is the terminals on the OEM ones have a tendency for built-up that may or may not compromise conductivity. But I find it’s good practice to keep them clean. Another thing, I found there’s fair amount of play in the grip’s battery compartment. To fix that, I inserted a standard business card.

Important: Before you install the BG-E2 make sure you have removed the batteries. The grip needs to be installed with zero voltage load and do not install batteries with different voltage amperage¹. Undesirable consequences can happen if you do! [¹ thanks to reader Daniel Moore for pointing this out].

The items you see above is officially called DIAL ASSEMBLY, TRIPOD and the product order number is CG2-1365-000. How I ended up needing this item began with the Low Batt problems above and thinking the grip is not tight enough a knee-jerk reaction would be to tighten the dial and then tighten some more. Over time the plastic gears just broke from the repeated abuse. Makes you wonder why Canon manufactured the wheel using plastic instead of metal like the other gears in the assembly (silly as it may seem, perhaps it’s hard to get the dial to color match in black?). Anyway, I had broken the gear and it was very time consuming to patiently and carefully turn the thread in reverse for the BG-E2 to come off completely. 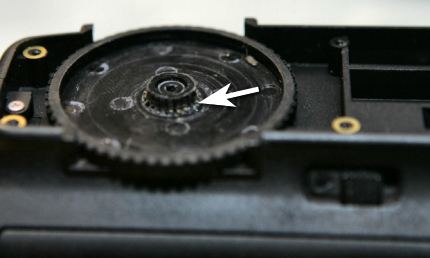 As you can see from the picture above, the gears in the centre of the lock dial has completed sheared. Check this out – A poster on Dpreview shared his horror story and from various reports, it would appear that Canon has not improved the design or material used in EOS 5D Mark II’s BG-E6 Grip. An unresolved BG-E2 problem can make your photography job hell as it had made mine countless times and occasionally comes back to haunt me. I shoot with a number of telephoto L lenses with Image Stabilisation. There was a time when it was widely believe that the IS placed extra load on the camera body and when combined with the unstable and fluctuating BG-E2 power issues triggered error codes Err 99 and Err 01 both of which I’ve encountered.

Disclaimer: this article is only intended for general information purposes only and does not constitute advice or substitute advice of an appropriately qualified professional. SHIMWORLD.com assumes no responsibility for information contained herein and disclaims all liability in respect of such information.