THERE are many ways to see Penang, and one of the more interesting manners would be on a trishaw. Also known locally as the beca or rickshaw, it is a quaint mode of transport that ferries passengers through the streets of Penang at a leisurely pace. In Malaysia, pedestrian-pulled rickshaws were gradually replaced by cycle rickshaws (beca in Malay). Cycle rickshaws were ubiquitous up to the 1970s in cities. Since then, rapid urbanization has increased demand for more efficient public transport, resulting in dwindling cycle rickshaw numbers. Today, cycle rickshaws are operated mostly as a tourist attraction, with small numbers operating in Malacca, Penang, Kelantan and Terengganu. I may or may not have been on one before as a kid being brought to many places around Asia on holidays but as an adult, this is my first.

Reputedly born in Japan as the “man-powered vehicle” or jinrikisha, the rickshaw later metamorphosed into the cycle-rickshaw and in parts of Asia is still the true developing-world taxicab (see Chasing Rickshaws below). Trishaws in Penang are currently mostly operated as a tourist attraction. Rapid urbanisation has increased the demand for more efficient public transport, resulting in dwindling trishaw numbers in the state. — iGT Penang

When my friends at Tourism Malaysia Brunei office sent me their 2011 calendar, among the photographs that I liked is one of a holiday couple on a trishaw in Penang. I remember saying to myself that someday I would visit Penang and take pictures of the trishaws. There I was, having ridden the trishaw, months later when my wish unbelievably came true much thanks to Tourism Malaysia Brunei.

Trishaws or Pedicabs are widely used for transportation in many parts of Asia. I know they exist in Singapore... http://fb.me/QyWAcH8L

4 thoughts on “EXPLORING THE PENANG HERITAGE TRAILS ON A TRISHAW” 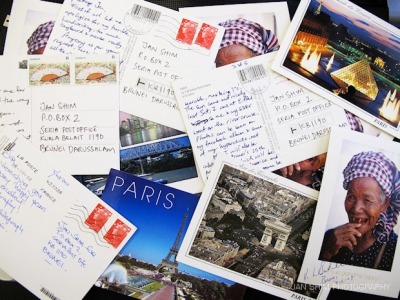